To recap, in our Sticky Cell Series Article #1 we explained how when white blood cells (also called leukocytes) are activated they become sticky; in Article #2 (of the same series) we explained how once activated, sticky cells are enabled to reach afflicted areas in the body through a process called leukocyte recruitment. Cells become sticky as part of normal immune system function. In this article we will explain how sometimes leukocytes behave abnormally by becoming stickier and attacking healthy tissue for no apparent reason. This behaviour is an early warning sign for autoimmune disease.

Under normal conditions, white blood cells are highly specialised assassins. They’re trained to attack and eliminate harmful, invasive microorganisms and damaged tissue. They have special capabilities which allow them to tell apart healthy body tissue from damaged tissue or foreign agents. They recognise the molecular characteristics on the cell surface of our own safe body tissue. This means that leukocytes will only attack and eliminate harmful or damaged tissue.

Under autoimmune disease conditions, leukocytes become activated even in the absence of a danger signal and they lose the ability to differentiate between safe and diseased tissue. They become stickier and attack everything. This random, unregulated attack is uncharacteristic of normal immune functioning and is the primary cause of all progressive autoimmune diseases such as multiple sclerosis, inflammatory bowel disease, rheumatoid arthritis, lupus and others. 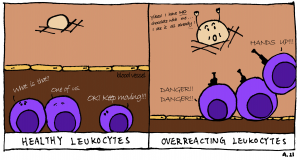 Increased leukocyte stickiness has been observed even at a very early stage of disease development. Measuring leukocytes behaviour and characteristics is a breakthrough in the detection of autoimmune diseases because early diagnosis and monitoring have previously been difficult and inconclusive. Autoimmunity generally develops over a long period of time; it can take years, even decades for a disease to show symptoms at which point it may be too late for treatment to be of benefit to the individual.

One of StickyCell’s primary goals is to create novel diagnostic tests which detect signs of disease early on and then intervention can be applied far sooner to maximise therapeutic outcome.

Just read this amazing article on Sticky Cell and Autoimmune disease. Congratulations on your new development. Any breakthrough that can detect an early onset of a disease and maybe offer an early prevention is worth applauding. Well done to the team!

Your subscription to StickyCell has been received.