What is Inflammatory Bowel Disease (IBD)?

Inflammatory Bowel Disease (IBD), including Crohn’s disease and Ulcerative Colitis, are life-long, chronic conditions characterised by severe and prolonged inflammation of the gastrointestinal (GI) system. Recent increases in the global prevalence of IBD have placed a significant economic burden on healthcare systems worldwide.

Symptoms of IBD include diarrhea, fever, fatigue, abdominal pain and cramping, which significantly reduce quality of life. People with IBD have a high risk of other complications, and most require surgery at least once in their lifetime. Diagnosis can be difficult and invasive, and no two patients have the same group of symptoms. Thus, there is an urgent clinical demand for new technologies in the diagnosis and management of IBD. 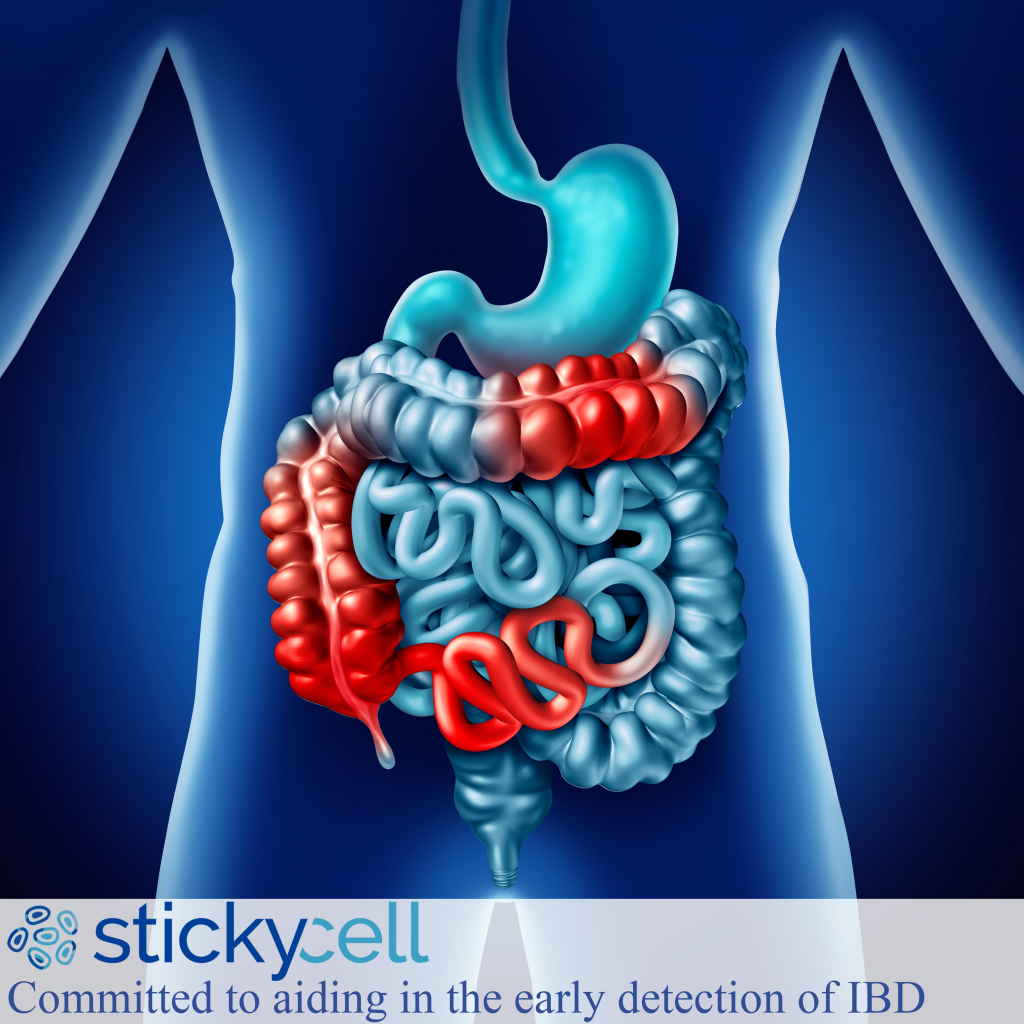 The Gut and the Immune System

The GI system is a unique and complex system comprised of tissues and organs responsible for transporting and digesting food, and excreting waste. It is a large interface between our insides and the outside world. Unfortunately, this leaves us vulnerable to infection and illness. So what protects us from the potential dangers of foreign pathogens? The short answer is the immune system. The GI system is home to the largest population of specialised immune cells in the body. These immune cells, known as leukocytes or white blood cells, survey everything that passes through the gut.  Leukocytes circulating in the blood are constantly recruited to GI tissues to replace old immune cells, and the delicate balance of this turnover is critical to maintaining a healthy gut.

In a healthy gut, if danger (e.g. foreign pathogens) is detected, resident leukocytes send out ‘danger signals’. These signals activate leukocytes in the local circulation causing them to become “sticky” so they can adhere to blood vessel walls and move into the infected GI tissue where they find and destroy foreign invaders. Following pathogen elimination, excessive leukocytes leave the GI system to avoid unnecessary damage to GI tissues.

The precise pathogenesis of IBD remains largely unknown. An early hallmark of the disease is abnormal activation of circulating leukocytes leading to excessive increases in leukocyte “stickiness”. These “stickier” leukocytes are more likely to be recruited to the GI system, even in the absence of danger signals. Abnormal recruitment and activation of leukocytes to the GI system result in chronic inflammation. Over time, chronic inflammation damages the walls of the digestive system and surrounding tissues, causing the painful and oftentimes debilitating symptoms of IBD.

Current diagnostic tools for IBD include imaging, endoscopy, colonoscopy, histology and the assessment of biomarkers. Unfortunately, most of these tests are only useful in detecting late stages of the disease and test results do not always correlate with clinical symptoms, which can be extremely frustrating for both patients and clinicians. Understanding the role of leukocyte stickiness in IBD disease progression will facilitate early detection of disease.

At StickyCell, our R&D team is working tirelessly to perfect a ground-breaking technology called the Leukocyte Adhesive Function Assay (LAFA), which can detect subtle changes in leukocyte stickiness (Article #5: Sticky Cell and Personalised Medicine). Based on this LAFA platform, we are developing a novel blood test, called the LAFA-IBD test, to detect early signs of IBD long before the disease has a chance to damage tissues and potentially before the appearance of disabling symptoms. It is the first functional assay for leukocyte stickiness in the blood, and it promises patients a better way to monitor disease progression.

IBD is a life-long chronic auto-inflammatory disease with significant adverse effects on quality of life.

Abnormally high levels of leukocyte “stickiness” is an early sign of IBD, offering an opportunity for early detection of disease.

Your subscription to StickyCell has been received.